Somewhere behind all the advertisements, there are actual buildings in Miami’s downtown core.

If you live or work in one of the towers wrapped like packages, you could pinpoint your location by saying you’re in the Heineken building or the Verizon building or the Apple Watch building or the “47 Meters Down” building that warns shark-phobes to “just stay out of the water.”

In addition to residing in a multistory billboard, there are the blots on your bay view — the 1-800-411-PAIN sign erected by an accident-chasing law firm or the 3,375-square-foot video screen that adorns AmericanAirlines Arena.

The city limits the number of mural ads on the sides of buildings to 45. They can be as big as 10,000 square feet. They have not proliferated, but a few have moved to larger or more visible buildings.

“The outdoor advertisers are constantly jockeying to get on a bigger wall closer to a highway in order to reach more eyeballs,” said Ehrlich, who calls them “monster murals.”

Developer Craig Robins wants to prevent the infiltration of mural signs into the Design District. The last thing he wants to see are tacky ads clashing with glamorous boutiques, modern art and new urban plazas.

“He’s got a vision, a sophisticated vision,” Ehrlich said. “He doesn’t want any chance of hemorrhoid cream or Estrella Insurance ads next to Tiffany and Cartier shops or a sculpture installation.”

Robins is seeking to protect the Design District from billboard blight. He has proposed shrinking the zone in which mural ads are permitted by moving the north border six blocks south to Northeast 36th Street.

On July 8, Miami’s city commissioners are scheduled to hear from Robins, who is the major property owner in the district. Robins was also instrumental in the redevelopment of South Beach in the 1990s.

“I’m not saying they’re inappropriate for all neighborhoods but we’re aspiring to a high level of art, design and architecture in the Design District,” Robins said. “Rather than commercialize it, we want to make it a special place that is a source of pride for Miami.”

One existing ad space would be allowed to remain but new ads would be banned under the proposal. Like other property owners, Robins could rent out his prime wall space, much of which is visible from Interstate 95, to outdoor advertisers for tens of thousands of dollars a month. But Robins has commissioned artists to turn the sides of his buildings and a parking garage into “beautiful installations.”

“If we took all our frontage and rented it out, it would be worth millions of dollars per year, but we’re not interested in marketing opportunities,” Robins said. “The commission is usually sensitive when an idea is definitely for the betterment of the community.”

The city makes almost $4 million a year from fees charged to outdoor advertising companies such as Clear Channel, Outfront Media and Wagner that earn billions from businesses seeking to get their messages and products in front of consumers.

“It’s another in a line of serial acts of municipal prostitution,” said Dusty Melton, a Miami-Dade lobbyist and political consultant who co-authored the county’s sign code in 1985. “The city regularly flouts the code with its interpretation of it and allows programmable LED billboards that are prohibited, No one has the political will to unplug these illegal billboards that are basically giant TVs on top of poles. There are probably 30 out there. The three on the Miami Children’s Museum are illegal.”

The city is discussing whether to raise its sign fees. One prime space that it rents out is on its own Miami River Center administrative building on Southwest Second Avenue and Fourth Street — a building that happens to house the code enforcement department.

“For a while that building had an ad promoting tourism to the Dominican Republic,” Ehrlich said.

The drive to or from downtown along State Road 836 is a gauntlet of signs, including a Volkswagen Atlas ad on the side of the University of Miami Miller School of Medicine 15th Street Parking Garage; Peroni beer and JetBlue Airways ads on the back of the Civica Center on Northwest 11th Avenue; a Haagen-Dazs ad on the side of the Springhill Suites hotel; and Guess and Shell ads on the sides of the Atlantis University building.

“Nothing is too massive,” Ehrlich said. “Property owners are now asking architects to design buildings with large wall spaces available for advertising.” 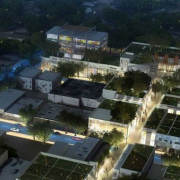 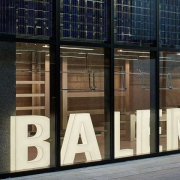