Okan Tower is one step closer to beginning construction.

Next week, a phased Class II foundation permit will be filed, along with a master building permit, a consultant working for the developer said.

The hotel will be known as the Hilton Bayfront.

Okan representatives previously told The Next Miami that the tower will top of at 890 feet. 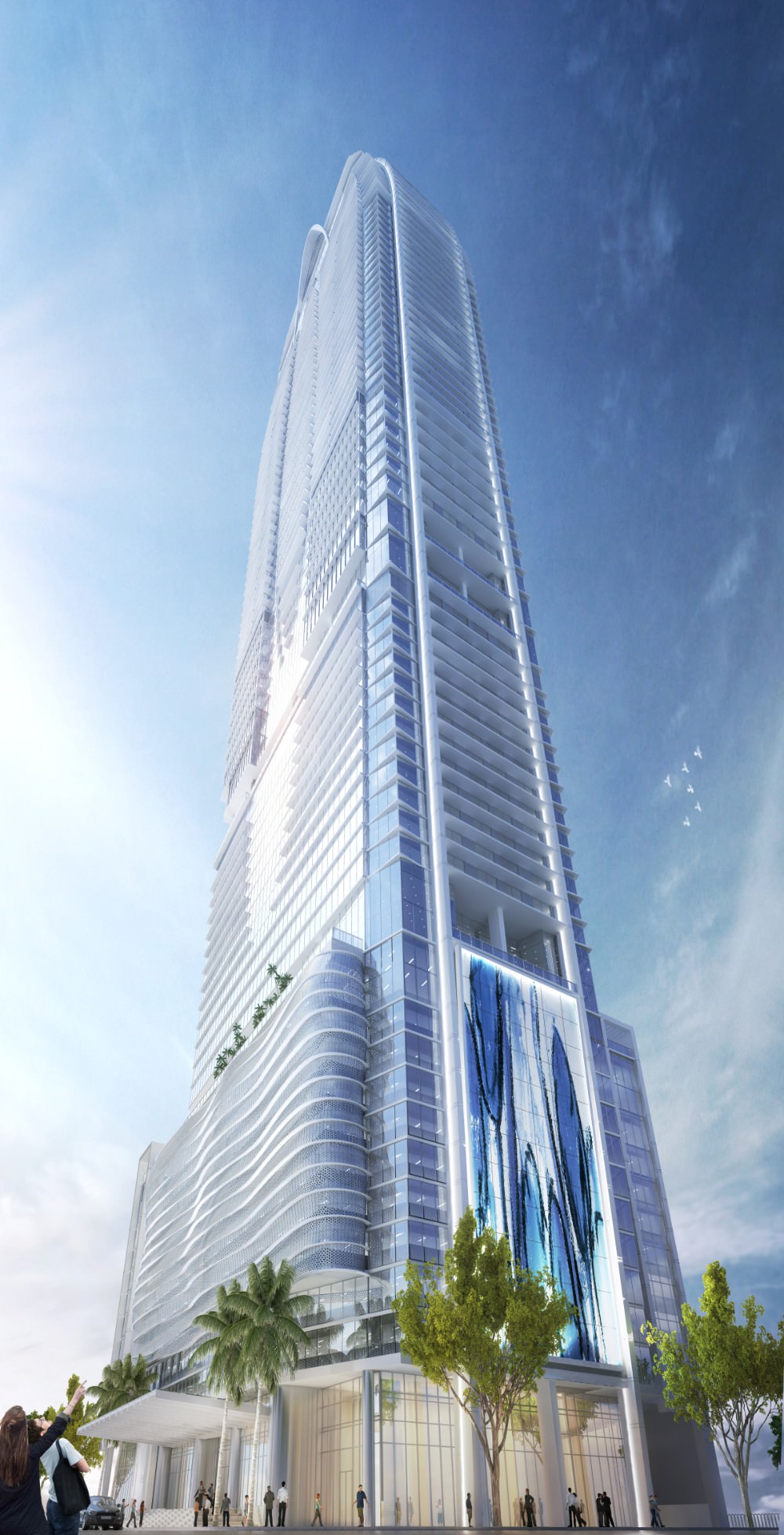 Developers of two major projects submitted proposals to a city of Miami board, including plans for a hotel in the Arts & Entertainment District and for a mixed-use tower in downtown Miami.

The Istanbul developer paid $18.1 million for the parking lot near the historic Central Baptist Church in March. At the time, a broker involved in the sale said the site was zoned for a 1,000-foot building with as much as 1.3 million square feet of space for retail stores, offices, hotel rooms and condos.

Both developments will go before the Miami Urban Development Review Board. 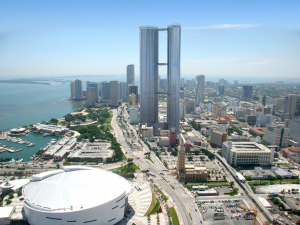 While debate continues over a 10-acre development centered around a 633-foot LED tower, support is growing among some local entrepreneurs and tech investors for the Miami Innovation District proposed for the Park West section of downtown.

“I’m becoming pretty passionate about this project,” said Andres Moreno, executive chairman of Open English, a fast-growing online education company in Coconut Grove that has attracted $120 million in venture capital. “Miami is definitely coming together as an ecosystem but it is pretty spread out … We haven’t found a hub.”

Moreno is among the South Florida entrepreneurs, angel investors and board members of Endeavor Miami who have met with Innovation District developer Michael Simkins to discuss the project. Moreno, who also recently founded Next University, is among the more bullish: He said he would move his companies there.

National players may share his enthusiasm, according to Simkins, who said he is in active discussions with large tech companies as potential anchor tenants. Already lined up, Simkins said, is Silicon Valley’s 500 Startups, a well-known global venture fund for early-stage tech companies.

According to Simkins, the “verbal understanding” with 500 Startups calls for the organization to open an accelerator for top Latin American startups in one of the existing buildings on his property, possibly as early as this fall, with the goal of moving to a new tower when complete. Dave McClure, founder of 500 Startups, brought the company’s PreMoney Conference to Miami in March and said then he was looking at opportunities to expand to Miami. 500 Startups did not return calls seeking comment for this story. 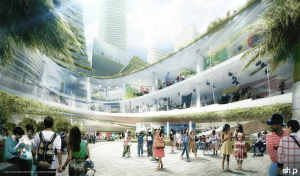 A rendering of the Miami Innovation District project shows a street view of the public spaces and “cloud” layer, or elevated public space (Rendering provided by Innovate Development Group)

To be sure, Simkins and his Innovate Development Group have been promoting the benefits of clustering large tech companies, mid-sized companies, startups, incubators, co-working and public spaces, services and cafes in a common area wired with super high speed Internet access as a way to accelerate the growth of a tech ecosystem — an effort supported locally by the Knight Foundation and eMerge Americas, among others. Similar districts are found in Boston/Cambridge, New York, Seattle, Philadelphia, San Francisco, Las Vegas and one emerging now in downtown Detroit, as well as London, Barcelona, Berlin, Stockholm, Medellin and many other cities, according to a 34-page Brookings Institution report. Many are in walkable-bikeable urban downtown-midtown areas close to public transportation and contain housing.

“The one thing Miami is lacking as a great city is the high-paying jobs that will allow us to evolve and elevate us overall. We visited innovation districts. We chose an architecture firm that has designed other innovation projects” — including recently Uber’s new headquarters, said Simkins, in an interview in his Miami Beach office.

He has not done a project of this scale before. Simkins’s proposal has faced a mountain of negative sentiment about the 633-foot centerpiece tower that would contain an observation deck, restaurants, retail, event space – and advertising in lights visible from the freeways. An electronic billboard in the sky is one of the nicer ways critics have described it.

Simkins prefers “a $250 million icon in the sky” and said the tower could also be used for public service messaging – a dashboard for the city if you will. But he is also quick to point out that the media tower, called the Miami Innovation Tower, is just one part of the vision for the live-work-play district, which includes nine towers with 7.4 million square feet – more than half of that earmarked for office space.

But it’s the overall concept, not the media tower, that interests the early tech supporters. What distinguishes successful innovation districts are big tech anchors. Juan Pablo Cappello, a lawyer and co-founder of the AGP angel network, said having a place – with literally the space – to house large companies is what excites him most about the Innovation District plan for Miami.

“If Miami can offer a place where enterprise tech companies like a Google, like a Facebook can have the space and resources to hire 100, 200, 500 people, that could be transformative,” Cappello said. “Companies like to cluster … With a project like this you can get some momentum building.”

Patrick McKenna, managing partner of HighRidge Global and an investor and entrepreneur who moved here a year ago from Silicon Valley, saw the power of momentum first hand. About six years ago, he said, San Francisco risked losing Twitter and other tech companies that were outgrowing their spaces. Meetings between the tech community and government ensued. Thanks to tax breaks and the rezoning of blighted sections of the city, the offices of Twitter, Square, Salesforce and Zynga lie within walking distance of one another. A district can attract both critical mass and tech anchor tenants, both critical to Miami’s tech development, he said.

Colombia-born entrepreneur Juan Franco, who moved to Miami from Silicon Valley about a decade ago to launch social gaming publisher Mentez and since has started three more companies, met Simkins through YPO, the Young Presidents Network. He, too, is a supporter of the project.

“What is missing here is an environment of entrepreneurs. That is what I like most about this project. … It will bring people together – young people with new ideas, people with experience, hopefully venture capitalists in the future. They are close together and that creates the interactions and the new ideas,” said Franco. Franco even likes the controversial tower: “I believe he Simkins needs to create a statement, that’s why I like the tower. It could be an icon of the city very related to technology and around the tower we can start to create that excitement.”

Moreno said he spent some time recently talking about the importance of frequent collisions – entrepreneur-speak for interactions that happen in tech clusters that Franco spoke about – during a visit with CEO Tony Hsieh, CEO of Zappos and engineer of Las Vegas’ innovation district. For Hsieh, moving his company headquarters and more than 2,000 employees there wasn’t enough. Hsieh also funded and led a resurgence of a once-blighted downtown area that now includes multiple big companies, startups, services, weekly speaker series, regular conferences, cafes, bars and a dog park.

Matt Haggman, Miami program director of the Knight Foundation, said he has talked with Simkins about the project in concept but has not seen the plans.

“I don’t know the details of the proposal, but our focus at Knight Foundation is to expand Miami’s entrepreneurial ecosystem, helping it become more diverse and broad-based. Any project that advances those goals would be good for the community,” Haggman said.

In the past three years, Knight Foundation has invested more than $10 million in Miami entrepreneurship programs.

Simkins plans to continue meeting with tech community leaders and wants to share plans and hear feedback at a future event by Refresh Miami, South Florida’s largest tech meet-up organization. He is also taking part in a panel discussion hosted by the Commercial Industrial Association about “Miami’s tech footprint” on Thursday. Moreno, a member of the Miami board of the global entrepreneurship nonprofit Endeavor, said a tech community advisory board is being formed for the Miami Innovation District project.

“The developer has spent a lot of time and money on what it will look like, but what will happen inside that venue is still to be defined. As a community, we still have an opportunity to shape this to be a really core part of the ecosystem. I think that is hugely exciting,” said Moreno.

Simkins, born and raised in Miami Beach, has become increasingly involved in the tech community and helped fund donations to various organizations and conferences, including Black Tech Week, Start-Up City: Miami, 500 Startups PreMoney Conference, Smart City Startups and eMerge Americas. About a year ago, he joined the AGP network, a group of angel investors, and has invested in six local startups.

He said his involvement and “brainstorming meetings” have helped shape features of the project, such as adding more community space. The plans by New York-based SHoP Architects, which also designed Uber’s new San Francisco headquarters, include a “cloud layer” – elevated public space with gardens and gathering places connecting all the towers. Also in the plans: parking lots near the I-95 exit so cars would be off the roads quickly to create a walk-bike culture, and 250- to 350-square-foot micro-unit apartments that would appeal to millenials. Nearly a third of the project – 2.4 million square feet – is earmarked for residential.

Though Simkins has already acquired the land needed, many political, legal and regulatory hurdles remain, particularly when it comes to the controversial media tower. Still, Simkins hopes to break ground next year. If that happens, he hopes to open the first buildings within three years and complete build out within seven. The developer said he is focusing first on securing a large anchor tenant. He then will move to middle-sized companies, startups, funding and support organizations in addition to 500 Startups, coworking spaces and university involvement. He’s also looking at ways to activate part of the property before construction, such as locating 500 Startups there.

Yet, the Miami Innovation District is just one piece of a much larger picture of Miami as a technology hub of the Americas, Simkins says.

“It is a component that is needed, along with a lot of the other things that are already taking shape,” he said. “But this provides the infrastructure … We need the enterprise companies that will bring the employees. That will keep the talent here.”

The bank (NYSE: RF) made a $53.54 million mortgage to Codina CG for the residential portion and a $15.35 million loan to Salzedo Office for the office portion. The site covers 1.6 acres at 2020 Salzedo Street.

Codina assembled the property with purchases of $5.2 million in 2010 and $977,500 in 2013 and then paid the owners of historical properties to transfer development rights to the property. 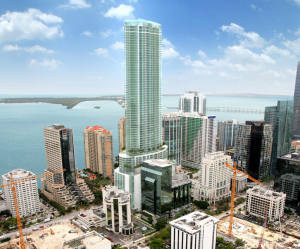 About five months ago, they had just begun driving piles down for the foundations, when construction of the 822 foot tower had finally picked up after an agonizingly slow beginning.