Parts of Miami Beach could be inundated with flood waters in as little as 15 years, and property values may slide amid the rising tide, according to nearly two dozen university heads and climate change experts who were on hand to answer questions on the effects of sea-level rise on South Florida during a Miami Beach Chamber of Commerce event at the W Hotel. 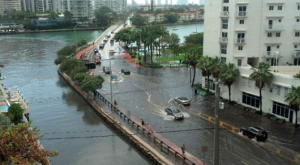 The purpose of the recent event, organized by land use and environmental attorney Wayne Pathman, was to warn business owners, developers, and contractors that the effects of sea-level rise will be impacting the property values fairly soon. Already, media around the globe are publicizing the fact that South Florida is “ground zero” for the adverse economic impact of sea-level rise, Pathman argued. Unfortunately, the region is still behind in preparing its infrastructure for the future.

“All eyes are upon us and South Florida isn’t ready,” said Pathman, co-founder of the Downtown Miami-based law firm of Pathman Lewis LLP and future chairman of the Miami Beach Chamber of Commerce.

Thanks to a slowing gulfstream, warming oceans, and ice flows submerging beneath the ocean from Greenland and Antarctica, the oceans are rising faster than ever, said Keren Bolter, research coordinator for Florida Atlantic University Center for the Environmental Studies. This has caused an increase in flooding events in recent years and it will only get worse. By 2100, the oceans are projected to increase by seven feet, Bolter added. At that level, The Keys, along with large chunks of Miami-Dade and Broward counties, will be inundated with sea water at high tide, destroying fresh water reserves, compromising underground sewage lines and septic tanks, and creating a host of other problems.

But you don’t have to wait 84-years to see the adverse effects of sea-level rise. Bolter said that in as little as 15 years, flooding in Belle Isle will grow much worse, especially at Island Terrace, a 16-story condo built in 1967. “It’s coming up not just at the sides,” she said while showing Lidar maps depicting future sea-level rise at Island Terrace and Belle Isle.

“It comes up from underground. That’s partly because the limestone that South Florida land is predominately made of us is extremely porous. Because of this, not even sea walls will stop the flow of water,” Bolter said.  “By 2060 the oceans are projected to rise by two feet. At that level, “the western half of Miami Beach is under water.”

“As the oceans rise, the cost of insurance will skyrocket,” Pathman said.  “Meanwhile, in an attempt to cope with the new reality, community leaders will raise taxes while property taxes are declining. As for the infrastructure of future residential and commercial projects, Miami Mayor Tomas Regalado recently declared on a radio show that the financial burden will fall on developers. However, at least some of the negative impacts of sea level rise can be mitigated if the business community takes a leadership role now. Many places around the world have already started adapting.”

Among the invited guests at the chamber event were Florida International University President Mark Rosenberg, Florida Atlantic University President John Kelly, and University of Miami’s Rosenstiel School of Marine and Atmospheric Science Dean Roni Avissar. They argued that their respective colleges are already training scientists and engineers who are not only studying the future effects of climate change, but also figuring out solutions on how communities like South Florida can adapt.

“We are very fortunate that we have a strong university system and a strong system of public education,” argued Matthew Welker, principal of MAST Academy at Florida International University’s Biscayne Bay campus. “That’s a very valuable resource.”

Josh Sawislak, global director of resilience for the Los Angeles-based engineering firm AECOM, said Miami could even replace Amsterdam as the true innovator of anti-flooding solutions.

“The brand can be, ‘This is a resilient city… Don’t go to Amsterdam to see how to prevent from being cut off by the sea, although they’ve got tasty cheeses. Come to Miami and see how to live with water,’” Sawislak declared.

One innovative idea has already been hatched in Miami. Rather than fight sea level rise, Bolter of FAU pointed out that “one student from the University of Miami” came up with the idea of simply making western Miami Beach “floodable” with the creation of new bays and living shorelines along with new boardwalks and flood-adapted buildings. (The UM student in question who developed that plan is Isaac Stein, who now works for the urban planning and landscape firm West 8.)

Besides speeches from experts, the event included an hour-long breakout session where business leaders sat at tables and asked questions to the assembled experts, some of whom flew in from other parts of the country to be there. The media, however, was ushered away from the session. Upon hearing that reporters were even present at the event, Donald Kipnis, founder and CEO of Brickell-based Development Service Solutions, walked out. Dozens of other chamber members left before the session even ended.

Harold Wanless, chair of the Department of Geological Sciences at the University of Miami, didn’t think the breakout session was long enough. Experts barely had 10 minutes to answer business leaders’ questions or lay out what needs to be done.

“We need to be planning, that is the bottom line,” said Wanless, who has long studied past sea-level rise events in Florida.

Following the breakout session, Jessica Goldman Srebnick, CEO of Goldman Properties, applauded the panel’s efforts. She also urged some restraint. Showing slides that show Miami Beach being submerged is what “gets picked up by the news.”

“We have to be very… strategic about how we discuss the reality of sea level rise,” Goldman said.

Pathman said the purpose of the event was just to “whet everyone’s appetite.” On September 14, the chamber plans to hold a roundtable discussion with “leading political and civic leaders about current and future strategies for sea level rise in South Florida” at a location to be announced.