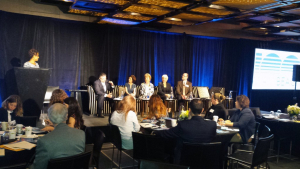 But the money raised from the sale won’t go to a new park, more bike lanes or a renewable energy facility. Instead, the Massachusetts State College Building Authority plans to use some of the funds to build a 725-space parking garage at Salem State University near Boston.

A parking garage at Salem State University near Boston, financed by so-called green bonds issued by a Massachusetts state agency, would feature car-charging stations, such as this one in Atlanta. Photo: Chris Aluka Berry for The Wall Street Journal

The garage will have electric-car charging stations and spots for carpoolers, and officials said it would cut down on pollution from students who now circle the campus in their cars, looking for spots. But some analysts and environmental advocates said the garage still encourages people to drive, a major contributor to greenhouse-gas emissions.

The debate over the garage underscores the lack of clear rules for determining what projects help the environment. Investors said the green-bond market allows companies and governments to tap into large pools of money for environmental initiatives. But some said “greenwashing,” the financing of projects whose environmental impacts are at best unclear, could discredit the market and make buyers wary.

One concern is that there is no mandatory legal framework to decide what projects are environmentally friendly. That leaves issuers and banks to decide. Wall Street firms last year adopted voluntary green-bond guidelines, but critics said they aren’t sufficiently stringent.

“I really don’t trust developers and bond issuers to police themselves, to make sure what they say is green is really green,” said Karen Orenstein, a senior analyst at environmental group Friends of the Earth U.S. When asked about using green bonds to pay for a parking garage, Ms. Orenstein said: “That’s why you need standards.”

To be open by early 2016, it will free up land for other new school buildings, reducing sprawl and making the rest of the campus more pedestrian friendly, he said. It is also being designed to receive a certification from the Green Parking Council, according to the bond prospectus.

The issue is becoming more important as the market expands. Green-bond sales have more than tripled from a year ago in each of the past two years, with $53.2 billion outstanding at the end of 2014, according to the Climate Bonds Initiative, a nonprofit group in London.

The voluntary guidelines, called the “green-bond principles,” suggest green bonds can pay for renewable energy, clean transportation and energy efficiency projects. Nothing, however, is explicitly ruled out.

The guidelines are expected to be updated this month, and many investors are generally supportive. Still, one group of buyers, including BlackRock and Pacific Investment Management Co., said recently that the guidelines “can benefit from further definition and structure.”

“Personally, I do think the principles could use an update and provide a little bit more rigor,” said Rob Fernandez, a credit analyst at Breckinridge Capital Advisors, which buys green bonds.

Some investors said having inflexible rules would be counterproductive, discouraging issuers from selling green bonds and making it more difficult to pay for environmentally friendly projects. But they said it is important that issuers are transparent about how the money is used.

Environmentally dubious deals are rare, and one questionable bond shouldn’t disrupt the market, investors said. But “if there were multiple events in a short period of time, and investors just get uncomfortable, that would be a different story,” said Manuel Lewin, head of responsible investment for Zurich Insurance Group, a green-bond buyer.

At Salem State, where many people commute, students said the need for parking is real.

“I feel like I’m in a battle with all these people for spots,” said Tessa Haynes, a junior. “It’s a little episode of ‘The Hunger Games,’ ” a movie about a fight to the death among teens.

The parking garage isn’t the only project to come under scrutiny. Environmental groups, including Friends of the Earth U.S. and International Rivers, have raised concerns that proceeds from a green bond sold by French power company GDF Suez SA could help support a hydropower plant in Brazil. The groups said the plant could imperil fish species and has increased deforestation.

‘I really don’t trust developers and bond issuers to police themselves, to make sure what they say is green is really green.’

—Karen Orenstein, senior analyst at Friends of the Earth

GDF Suez said “a great effort is being undertaken to understand and to preserve biodiversity.” The company said it is deciding which projects will benefit from a €2.5 billion ($2.66 billion) green bond it sold last year and will disclose its decision in the coming weeks.

Mr. Adelman, driving around the Salem State campus, pointed out cars parked on nearby side streets with university parking stickers. He said the new garage isn’t encouraging people to drive more but is serving existing students who must park off campus. “Nobody objects to building a parking garage,” said Mr. Adelman, who drives a hybrid car himself. “The reason it’s questioned is because of the discussion about the green bond.”