For two years the major players in Wynwood, Miami’s hippest, hottest emerging neighborhood, have been working on plans to jack the old industrial district up to the next level — only to now find themselves sharply at odds over exactly what that means, with the district’s future hanging in the balance.

Even as one group of property owners and developers publicly worked up a plan to control development to maintain Wynwood’s creative vibe and human scale while drawing in more housing, shops and businesses, the area’s biggest landowner, New York moving-company mogul, developer and arts patron Moishe Mana, privately sketched out a blueprint that embraces the same broad ideas — but on a dramatically different scale.

No sooner was the ink dry on the Miami City Commission’s approval of the Wynwood Neighborhood Revitalization District — special zoning rules that limit heights to eight to 12 stories and extract payments from developers to improve streets and create parking garages and public open space — than Mana applied for his own plan.

Mana’s proposed Special Area Plan, which would supersede the new zoning rules on 24 acres of his property, calls for a massive nine million square feet of new development, including towers up to 24 stories, while exempting the developer from the public-benefit programs in the NRD plan, as well as payments to the local business improvement district. In lieu of that, Mana has proposed to build an expansive public plaza and a city fire station and bury obtrusive FPL electrical lines that run through his properties at his own expense. 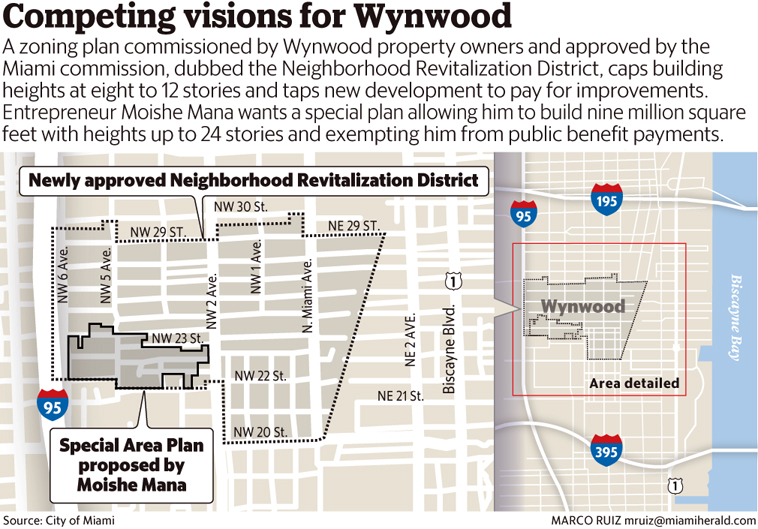 The Mana plan has provoked some serious balking from a good portion of his fellow Wynwood property owners, including Goldman Properties, the firm credited with launching the neighborhood’s transformation from derelict warehouse district to hipster mecca and a key backer of the NRD plan.

Those Wynwood owners and entrepreneurs say they’re concerned Mana’s mammoth project could overwhelm its modestly scaled neighbors while providing insufficient public benefits and little help in mitigating its impact on traffic, parking, policing and other public services — in effect, they contend, passing on the public burden of his upzoning to other local property owners who agreed to cap development.

“Everything we’ve done is to try to develop a comprehensive strategy to create a great place,” said Goldman Properties managing director Joe Furst, complaining the Mana blueprint is so vague in places there’s no gauging its precise effects on the rest of Wynwood. “There’s too many question marks.”

Mana’s representatives have noted it was no secret that he was working on a big plan for his Wynwood properties, centered around the former Wynwood Free Trade Zone complex, which he purchased in 2010, and that he never objected to the NRD plan. But Furst and others note Mana held details close to the vest and did not brief anyone else in the neighborhood until he filed his application with the city in November.

Everything we’ve done is to try to develop a comprehensive strategy to create a great place.

Mana’s planner and architect, Bernard Zyscovich, called his client’s promised public benefits “very, very significant,” saying their cost will run into the tens of millions of dollars. And he said Mana has also agreed to mesh the zoning along the edge of his property on Northwest Second Avenue, Wynwood’s main drag, with the NRD zoning, creating a consistent urban street front.

“We’ve done a tremendous amount to collaborate and make sure we’re integrated with the rest of Wynwood,” Zyscovich said. “We also have our own objectives, of course.”

How Mana’s proposal fares will play out over the next several weeks, and is likely to have defining implications for Wynwood’s redevelopment. The debate over his plan is the first sign of a serious split in the neighborhood since it began drawing outside developers, investors and speculators who’ve driven up rents and land prices and driven out many of the artists and galleries that characterized its early revival.

The NRD plan, supported by a majority of local property owners, was an effort to guide development before it happened, upzoning just enough to foster construction of reasonably priced housing and new commercial spaces while maintaining a consistent scale, and encouraging a building-design aesthetic that blends with Wynwood’s funky industrial look.

But some are clearly concerned that Mana’s plan, because it covers a substantial percentage of the neighborhood, could upend that carefully calibrated strategy before it has a chance to work.

Earlier this month, the board of the Wynwood Business Improvement District, an autonomous public agency chartered by the city that commissioned the controlled-development NRD plan, declined Mana’s request for an endorsement of his own plan after twice meeting to consider it. Instead, the BID board, which Furst chairs, asked the city’s planning and zoning board to defer a scheduled vote on the Mana plan while agency leaders could study his proposals further.

The planning board put its vote off until Jan. 20 after Mana’s representatives agreed to a postponement. The Mana plan and a companion development agreement with the city will ultimately need to be approved by the Miami commission.

Mana’s attorney, Iris Escarra of Greenberg Traurig, was out of the country through January and could not be reached for comment. At the BID’s Dec. 14 meeting, though, she hinted Mana might be willing to compromise. “It’s possible this is going to evolve,” she said. “Stay tuned.”

Escarra did say that the development agreement will legally require Mana to keep his promises, including building the fire station and every acre of the promised open space. She also noted that city planners have already insisted that Mana meet other elements of the Neighborhood Revitalization plan. Among those: That his new buildings be reviewed by a new Wynwood design review board created under the NRD, and that Mana’s development provide cut-through “paseos” to foster pedestrian flow and connectivity to the rest of the neighborhood.

BID board members, who represent the district’s property owners, say they would like to reach an understanding with Mana. But what they’ve seen so far, they say, doesn’t seem to justify the large increases in scale and density he’s seeking.

And neither his zoning plan nor the development agreement appear to sufficiently hold Mana to building the promised public space in a timely fashion, nor guarantee a high design quality, they contend. Because the project would be built out over 30 years, some Wynwood stakeholders worry Mana might leave the public space for last.

“The vision for the Mana project is a good one,” said Jonathon Yormak, an investor and BID board member who’s planning a mixed-use building on a large vacant lot his firm owns off Wynwood’s main drag . “Everyone believes the underlying premise is a good one. We are all inclined to support it.  To Mana’s credit, he has engaged us. But for what he is really providing, versus what he’s asking for, does that seem like a fair outcome? The initial answer is no. What he’s presented is more to his benefit and to the detriment of the neighborhood,” Yormak added. “If they care to get our support, I believe they can get it. It will require a little bit of consideration and cooperation from them.”

Zyscovich said he and Mana’s team plan to meet with BID members in early January.