A judge has rejected the city of Miami’s attempt to evict Flagstone Island Gardens from its development site on Watson Island and declared that the city violated the company’s lease.

Flagstone Island Gardens was approved for hotels, condos, retail and a marina on Watson Island in Miami.

The ruling could allow the mega-yacht and mixed-use project to move forward while leaving the city on the hook for million of dollars in damages and attorney fees. Attorney Eugene Stearns, who represents Flagstone Island Gardens, said the developer has spent over $120 million on the project so far.

“The city’s attempt to confiscate the huge investment this family made in this property has been revoked,” Stearns said.

City Attorney Victoria Méndez said the city is evaluating whether to appeal. That decision will likely be made by the City Commission, which voted 5-0 in May 2017 to declare Flagstone Island Gardens in default on its ground lease.

The judge’s decision followed a seven-day trial that wrapped up earlier this month. Miami-Dade County Circuit Court Judge William Thomas ruled that Flagstone Development Corp. is in full compliance with its lease for the city-owned property. On the other hand, he said, the city breached the lease by refusing to approve routine building permits and by declaring the developer in default for no valid reason. The city’s notice of default to the developer is invalid, the judge ruled.

“The city’s breaches have directly and proximately caused damage to Flagstone in an amount to be determined after further proceedings,” Judge Thomas said.

Flagstone has continued to operate the marina because it obtained a stay of the eviction, but it was unable to move forward with development plans. The judge noted that city of Miami staff found no grounds for default before the commission acted.

“City staff concluded that Flagstone was in compliance with the agreements and this court concludes that the substantial and competent evidence supports no other conclusion,” Judge Thomas ruled.

Led by Mehmet Bayraktar, Flagstone Island Gardens LLC and Flagstone Development Corp. was selected by the city in 2002 to lease and develop a project on Watson Island, which is along the MacArthur Causeway on the way to Miami Beach. Work on the site stalled during the recession, then again when community activists opposed to the project unsuccessfully pursued lawsuits.

In 2016, Flagstone completed the Island Gardens Deep Harbour mega yacht marina with 5,000 linear feet of boat slips. It opened a restaurant, but was forced to shut it down for permitting reasons. Bayraktar planned to build two hotels, condos, retail, and restaurants, including a fish market and a harbormaster building.

The developer signed a ground lease with the city in 2016 for the retail and parking phases on 24.2 upland and submerged acres. The deadline to start construction was April 30, 2017.

A group of local activists called the Coalition Against Causeway Chaos started a campaign to block the project over traffic and height concerns, filing lawsuits and submitting numerous letters to city officials. Stearns, the attorney from Stearns Weaver Miller, said this group had major influence on both city staff and the city commission in stifling Flagstone Garden’s progress. Building permits that should have been granted were stalled, he said.

“The City Commission took the unprecedented step of stripping the Planning and Zoning Department of all its authority to act on Flagstone’s application,” Judge Thomas ruled. “As a result of CACC’s actions, all formal actions taken by the city related to the project was overly examined and overly inspected beyond the normal approval process.”

In the city’s notice of default, it claimed that Flagstone failed to start construction by the April 30, 2017 deadline. However, Judge Thomas ruled that the developer laid rebar and poured concrete to build the foundation of the fish market and harbormaster building well before that deadline.

“At the end of the day, the commission made the right decision and our case is very strong on appeal – the developer was in default and the contract was broken,” Russell said.

But Stearns said Flagstone fully intends to develop the project and he expects the city to issue a building permit. He will ask the judge to issue a restructured lease to account for the city’s default and provide new time frames for construction.

“I am enormously grateful to have been able to tell his story while having misleading political motives exposed in a forum where truth stands taller than hysterical falsehoods, Bayraktar said. “The vision we have for this project is alive and well and will prove transformational for this great city now that we will have the opportunity to finish it,” 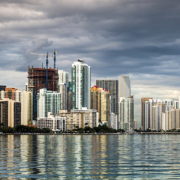