Microsoft will use the space at 830 Brickell as its new regional headquarters.

One of the largest leasing deals in Miami-Dade last year was for 37,700 square feet in a building on Miami Beach’s Lincoln Road.

The lessee: WeWork. Founded in 2010, this New York-based company specializes in creating shared workspaces for startups, private contractors, artists, small firms and international corporations — basically, everyone. WeWork, which was valued at $5 billion in December, has opened locations in nine cities across the U.S., plus two in Israel. The firm’s four floors at 350 Lincoln Road, a 1940s-era building that will be its first Miami location, will be among WeWork’s newest locations once renovations are complete.

“As we build out our global network with locations in major global cities, Miami of course is on our map,” Mark Lapidus, head of real estate for WeWork, told The Real Deal. He cited the city’s growing “entrepreneurial market” and its status as a “gateway to Latin America” as reasons for opening the new location.

WeWork is far from first to market in Miami with the shared office space concept. Local players have been operating here since at least 2010, and many are in the process of expanding. 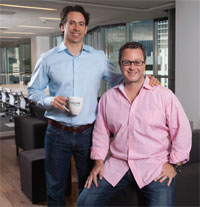 “The demand for what we offer is very high,” said Philippe Houdard, co-founder of Pipeline, which has operated in a 23,000-square-foot office space in Brickell since 2012. So high, Houdard added, that occupancy for Pipeline’s private suites and reserved desks is near 100 percent, with tenants ranging from established corporations such as Italian car design company Pininfarina to relatively unknown companies including Ironhack, a computer programming school, and Crea7ive, a local web design company.

Monthly rates for shared offices can range from $99 for a mailbox and a phone number to more than $3,000 for a private suite. Services, much like the rates, vary from operation to operation, but typically a shared-office space in Miami offers access to refreshments, high-speed Internet, meeting rooms, and — perhaps most significantly — networking opportunities and camaraderie.

“There is a sense a community,” said Ana Maria Yumiseva, owner of Frecuencia Latinoamerica, a mobile technology company that operates in Pipeline’s Brickell office.

Donna Abood, managing director of the Miami office for Avison Young, said Miami-Dade is fertile ground for shared office space. “When you have entrepreneurs, you have a lot of startup businesses, and their need to collaborate is great,” said Abood, a 30-year veteran of South Florida commercial real estate.

An added bonus: co-working spaces typically offer short-term leases or require no leases at all.  Short-term and month-to-month leases are traits shared by an ancestor of the co-working space: the serviced “executive suite” office model. In the 1980s, companies such as Regus started opening executive suite offices in Miami-Dade that provided separate businesses a shared secretary and a conference room. Unlike the new generation of co-working spaces, tenants in executive suites (which continue to operate in Miami) tend to keep to themselves. “They aren’t looking for collaboration,” Abood said.

Michael Feinstein, CEO of the Büro Group, said his company was the first to bring the collaborative co-working space model to Miami (Abood said that if Büro wasn’t the first, they were certainly one of the first). Feinstein said he had spent a lot of time in coffee shops when he worked as a resort development consultant back in 2009. Then inspiration struck.

“We had not seen anyone actually [create] a shared work environment, so we went about doing it ourselves,” said Feinstein, who started Büro in Midtown Miami in 2010 with the help of friends, family and  later on, an investment from G3 Capital.

Büro now provides space for more than 100 companies (The Real Deal South Florida is a temporary tenant). The company operates in a second, 10,000-square-foot location in Sunset Harbour in Miami Beach, and Feinstein doubled his office space in Midtown Miami from 10,000 to 20,000 square feet last year. They are also opening additional spaces in the Coppertone building in the Miami Modern Historic District and the Engle Building in Coconut Grove.

Pipeline is growing, too. This summer they will open a Coral Gables office, which will include specialized services for lawyers, Houdard said. Pipeline is also planning to build an 80,000-square-foot space in Miami’s Little Haiti area. They also operate in Philadelphia.

Pipeline and Büro are seeing increased competition in the market, and not just from behemoths like WeWork. In Little Haiti, Urbana Atlantic Group and Conway Commercial Real Estate just finished converting a 26,000-square-foot office building, once used as a BellSouth headquarters, into MADE at the Citadel, a co-working space that offers shared work space in addition to a shared workshop area for artists.

“We are just opening our doors now and about 40 percent of our office space is already accounted for,” said Timothy Conway, managing director of Conway Commercial Real Estate. “And we have not done much marketing, if any.”

Wendt and other sources estimate that there are 15 to 20 shared offices ventures operating in Miami-Dade. Companies providing shared office spaces are still a relatively new concept in the area and are not yet specifically tracked. Wendt noted that the growth of shared offices is not just local or national — it’s a global phenomenon. “Co-working spaces are doing well around the world,” she said. “It’s a very fast-growing segment.”

WeWork signed a lease for 40,000 square feet to open a co-working space in Miami Beach.

CBRE’s Maggie Guajardo Kurtz and Nancy Cibrano, of N Cibrano Realty, were the brokers for the landlord at 350 Lincoln Road. The 50,000-square-foot building, owned by The Wings Group, is now fully leased.

“This property’s location on the doorstep of the world-renowned Lincoln Road, along with its unique, historic features, makes it ideal for WeWork’s first Miami location,” Kurtz said in a news release.

WeWork offers flexible leases, from individual desks to small office spaces. Tenants are supported with high-speed internet and conference rooms, and also get discounts on services such as Shopify, Uber, Zipcar and legal services. It has more than 20 locations.

“The vibrancy of Miami’s small business and start up communities is the perfect match for WeWork’s unique offerings and energy,” said Mark Lapidus, director of real estate at WeWork. “We look forward to opening our doors and fueling the growth of the city’s many small businesses.”

WeWork should open in Miami Beach in the first quarter.