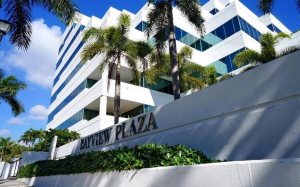 The first, dubbed the Bayview Executive Plaza, is a 57,155-square-foot building at 3225 Aviation Avenue. It is occupied by the Femwell Group Health, Wolfberg Alvarez & Partners and the accounting firm Pinchasik Yelen Muskat Stein.

The second, named Continental Plaza, is a, 80,380-square-foot building at 3250 Mary Street. It’s across the street from Park Grove, an upcoming mixed-use development that has plans for three 20-story condo towers with retail and office space.

Both were purchased by a company titled Allegra Holding, and both were sold by TA Associates Realty.

Douglas Mandel and Benjamin Silver of Marcus & Millichap brokered the sale for both the buyer and the seller. “These buildings are well positioned to reap the benefits associated with the explosive growth of new developments in The Grove, and the buyer will be able to take advantage of future spikes in demand that will push rental rates to new highs,” Mandel said in a statement.