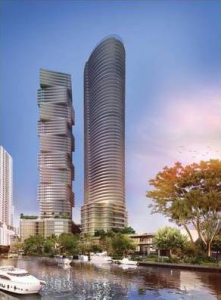 A rendering of the Miami River project

The Miami City Commission late Thursday unanimously approved a development agreement and rezoning of a 10-acre site where Pearl and the Chetrit Group plan to build the mixed-used site that includes four towers, a hotel, shops, restaurants, and a public river walk with boat slips. There, a large section of Little Havana along the Miami River will get a major facelift.

To obtain city approval for higher density, the developers promised to invest $14 million into an affordable workforce housing fund, as well as $7 million for public infrastructure surrounding the project, including renovating nearby Jose Marti Park. Raymond Jungles has designed the plans for the park.

“This project is of city-wide importance,” the developers’ lawyer Melissa Tapanes Llahues told commissioners. “It makes the vision of an interconnected city a reality.”

A rendering of the Miami River project

Located between Southwest Second Avenue and Southwest Third Avenue, the Miami River and Southwest Seventh Street, the project will be built in five phases. The complex would have 1,678 residential units, 330 hotel rooms, 266,000 square feet of retail and office space, and more than 2,000 spaces. The first tower with 200 hotel rooms and 328 condos, Tapanes said, is scheduled for by the end of 2018. The developer is also getting 1.2 million square feet of “air rights” from the city at $17.82 a square foot, or $21 million, which is being used for the public improvements. 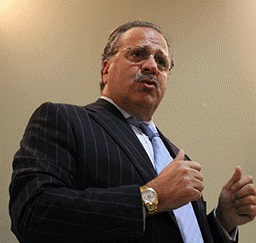 Pearl and the Chetrit Group have been working on the project’s design since they assembled the land for roughly $100 million last year. Some of the properties they acquired included the Finnegan’s River restaurant and the Pleasure Emporium adult superstore.

The developers and their architect, Kobi Karp, also consulted with the Miami River Commission on the site’s design which calls for restaurants and shops to line the river walk that will be accessible to Brickell and East Little Havana residents. There will also be a public gathering place at an I-95 underpass.

“This is a very exciting project in a blighted area that could use some enthusiasm,” said Miami River Commission Chairman Horacio Stuart Aguirre.

The commissioners also heard from a dozen residents and property owners who spoke in favor of the project. City Commissioner Frank Carrollo, whose district includes the site, gave the project a thumbs up after negotiating some more concessions from Pearl. Carrollo said the developers had agreed to contribute $14 million to the city’s workforce affordable housing fund and to set aside a space for the city to build a small paramedic station. The first $1 million is due when Pearl and Chetrit submit site plans for the towers, which they expect will be sometime in February 2016. Another $1 million is due once the first building permits are approved.

“This is a beautiful project,” Carrollo said. “I am glad to say I met with the developer and his team to address some issues