Developers are looking to build big in Coral Gables, this time along South Dixie Highway.

Paseo de la Riviera, a mixed-use project that would replace the old 155-room Holiday Inn across from the University of Miami, will come before the city’s planning and zoning board on Wednesday, Aug. 12. 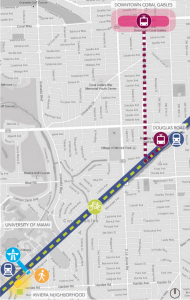 The project application details the plans to revamp the strip-mall-dominated corridor on U.S. 1 that splits Coral Gables. Proposed are a 13-story residential building with 234 units, and a 10-story hotel with 252 rooms.

Built on 2.7 acres, the main building will be 142 feet tall, have 4,380 square feet of restaurants, 14,094 square feet of retail, and 903 parking spaces, as well as three sculptures. The project would feature shops and restaurants on the ground floor and a pedestrian passage, dubbed the “Paseo” (72 feet wide, 325 feet long) connecting to the adjoining neighborhood.

This isn’t the first venture of its kind flowing through the city’s pipeline. A barrage of high-density projects have been approved, some already under construction or currently in the process of being birthed, stirring heated debate among Gables residents and elected officials. 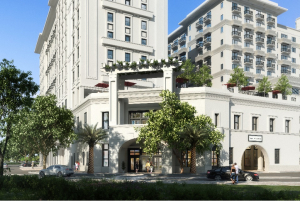 In June, commissioners approved the Mediterranean Village project at Ponce Circle — more than one million square feet of condos, hotel and commercial space just three blocks south of Miracle Mile on Ponce de Leon Boulevard. That project sparked deep conflict, creating major division in the community. Some feared the city’s proud tradition of scrupulous planning and highly controlled development would come to an end, bringing in loads of outsiders and traffic. 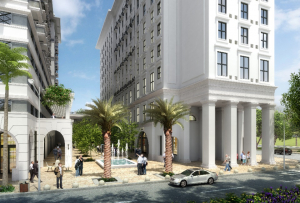 Others, however, were firm that the mixed-use enterprise would bring growth and rejuvenation to the city’s downtown area, all while honoring Gables founding father George Merrick and his scenic vision of a Mediterranean promised land.

Although Paseo de la Riviera is smaller in scale, the plans have divided residents of the single-family neighborhood who live directly behind it.

Wayne “Chip” Withers, who served as a city commissioner from 1991 to 2011, has lived off Hardee Road and Maynada Street for more than 60 years.

“If you look at the city of Coral Gables, it is very well planned. You don’t have really tall commercial buildings butting up directly with a residential neighborhood,” Withers said, adding that his major concern is the reasoning behind the Paseo. “At the end of the day the overriding question is: What’s the reason we’re doing this? Does the city need tax dollars? What is the pressing reason? To appease the developer? Or is it something that is really gonna be beneficial to this city and to this neighborhood. Why are we allowing it to be up to three times taller than the Holiday Inn?”

Henry Piñera, 39, said the Paseo could possibly reshape the South Gables and its tight-knit neighborhoods, serving as a lunching pad for other high-rise developers to move in, build and make some money.

“We know that this is going to be the domino effect that sets everything off. From an overall Coral Gables perspective, no other building would be this tall outside of the downtown area,” said Piñera, who lives on Aduana Avenue with his wife and two young daughters.

He said the Riviera neighborhood already experiences intense cut-through traffic because of congestion on U.S. 1. He says the new project wouldn’t be what he “bought in” for.

“I made the decision to purchase and renovate this house because this is where I’m going to raise my kids. This particular building is so massive that it will have a huge impact. You’re taking the density and roughly making it three-and-half-times larger than the Holiday Inn,” he said. “Not only that, but the project overlooks Jaycee Park, one of the reasons why I bought into the neighborhood.”

Developers however, see the location as a benefit to residents, saying the project has strategically been placed in a transportation hub — right across the street from the University of Miami, Metrorail, trolley route stop, bike paths, as well as on the block of a future pedestrian bridge.

“That’s what makes this site special,” said Jorge Hernandez, who is the project’s leading architect, a longtime Gables resident, and a UM architecture professor. He said the transport amenities make for an “animated urban ground floor.” “If you look at the renderings, the Paseo would connect to U.S. 1, giving the notion to being able to walk and bike to a lively open space. It would be a hub for everyone.”

Developer Brent Reynolds says “given the adjacency to the Metrorail, it would develop a place for next-generation families and nonprofessionals.” “It really is an amenity that is not seen anywhere in Coral Gables,” Reynolds said. “It’s a well-designed sophisticated boulevard, focused around public transportation and drawing the community in.”

Developers are asking the city to make a zoning exception on the parcel, allowing their project to be 142 feet tall, instead of 77 feet.

Both Reynolds and Hernandez hope that the building across the street — UM’s Gables One Tower — which also reaches 142 feet in height, will convince city officials to vote in favor of the Paseo.

“People dislike the UM building. It’s a square and flat building; it doesn’t have a profile against the sky,” Hernadez said. “Our building will begin to tame that image. We’re hoping to build a community of buildings of the same scale and amend the city code back to what it was under George Merrick’s vision, using the building next door as a height precedent.”

Until 1979, Coral Gables zoning laws in the area allowed buildings up to 142 feet tall. After Gables One Tower was built, city officials in 1980 reacted to the aesthetics and changed the zoning code, reducing the height cap to 77 feet. “It was a reaction from the aesthetics and the effect of that particular building. It runs parallel to the street. It’s a giant wall. Our building would run perpendicular,” Reynolds said.

The Coral Gables Planning and Zoning board will meet at 6 p.m. Wednesday, Aug. 12 at Coral Gables City Hall, 405 Biltmore Way.