What was once a village that attracted bohemians during the 1950s and ‘60s, Miami’s Coconut Grove, is now attracting a different class with their new and improved condos. 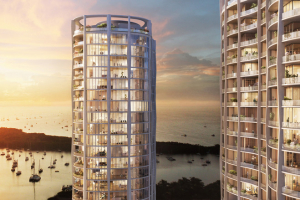 A rendering of Park Grove

According to The Wall Street Journal author Stefanos Chen, prices for some units in Park Grove’s under-construction towers are expected to top $1,900 a square foot—a city of Miami record.

Coconut Grove’s priciest home, a historic estate listed for $47.5 million, is likely to be torn down as the value really lies in its 6.9 acres, agents say.

Listing agent Mercedes Hernandez with Avatar Real Estate Services says homes on valuable waterfront lots, [like Sandy Dufay, a retired health care company founder] are dwindling because developers are tearing them down to build larger modern spreads that maximize their return. Down the block, a home on a similar lot was demolished to create a 9,800-square-foot spec house listed for almost $8 million—more than double the price of Ms. Dufay’s home. “There’s hardly a street that hasn’t had something knocked down” for redevelopment, says Ms. Dufay, who hopes her future buyer will keep her home intact.

Per The Wall Street Journal, Mr. Pérez, the billionaire developer and founder of Related Group, lives down the road in a 10,000-square-foot Venetian-style palazzo. Nearby is Jonathan Lewis, an investor and son of the late Progressive Insurance chairman, Peter Lewis, according to records, as well as Carlos Migoya, the CEO of Jackson Health System (and occasional tennis partner to Mr. Pérez, the developer says).

With celebrities like Golden Globe winner Christian Slater and many more, Coconut Grove’s housing market has noticed a significant change.

The Wall Street Journal also reports that The housing market has risen rapidly in the last few years, says Michael Light of Miami Luxury Homes. For publicly listed condos and homes, the median sales price in the Grove was $675,000 in 2015, up 17.5% from 2014. Last year, NBA star LeBron James sold his roughly 12,000-square-foot home in the Grove for $13.4 million, according to public records—one of the most expensive home sales in the village.