Miami’s urban core markets generated $1.2 billion in retail property sales last year, with more than half of the total occurring in Brickell, downtown and Wynwood, according to a recent commercial real estate report prepared for the Commercial Industrial Association of South Florida.

The findings were made public Friday during a panel discussion sponsored by the association that featured Tony Cho of Metro 1, Raymond Fort of Arquitectonica, Andrew Frey of Tecela, and Jon Paul Perez of the Related Group.

On the leasing side, the Biscayne Boulevard corridor, Brickell, downtown Miami, the Design District, Midtown, MiMo, Little River and Wynwood accounted for a combined 10 million square feet of leased space. Vacancy rates range from as low as less than 2 percent in Brickell to 12 percent in the Design District.

Miami’s urban centers will continue to experience rapid growth in the commercial retail sector in 2016 as the market for luxury condo sales slows down, the panelists told audience members huddled inside an unfinished office suite at Three Brickell City Centre.

“There is going to be a slowdown and a correction in ultra high luxury,” Metro 1 founder and CEO Cho said. “I think we will see a shift in type of projects [getting built]. I see more infill, mixed use projects catering to millennials.”

Frey, Tecela’s principal, echoed Cho. “With waterfront luxury high-rise condos, there is going to be an oversupply and there is going to be a decline in value,” Frey said. “I don’t think that is any real surprise to anyone. That is separate from the rest of the real estate industry, including multifamily, retail and office. I think [those sectors] seem to be doing pretty well.”

The panelists specifically singled out the ongoing transformation of Wynwood, which has morphed from an artist-driven warehouse community into a thriving, hip retail and office neighborhood over the last decade. With the new zoning overlay that was approved for Wynwood last year by the city commission, the neighborhood is poised for even more growth once developers in the area complete new residential buildings.

“I most recently fell in love with Wynwood,” said Perez, a Related vice president. “I didn’t understand it until about a year ago. You get this real sense of a new neighborhood that is truly transforming and changing.”

Frey said the new zoning overlay is good because Wynwood developers can now build projects with more density. “You will have actual residents, locals and repeat customers that live in the neighborhood,” he said. “With the new rezoning, you have opened a fantastic development opportunity there.”

According to the association’s market report, Wynwood experienced $165 million in retail property sales volume in 2015 and the vacancy rate is right at 6 percent. The average lease price for retail space is just above $80 per square foot.

An Argentine developer, who is not named, is planned on building a thirty story mixed-use apartment tower at 1700 Northeast 164th Street in North Miami Beach, currently a parking lot.

The site is further west than most new development in the area, which are concentrated along the Biscayne Boulevard corridor, but is a few blocks east of the old 163rd Street Mall and its Walmart Supercenter, and will be one of the tallest buildings in the area.

A new strategic vision, competitive pricing and a less hectic lifestyle are three reasons North Miami Beach is emerging as an attractive location for new residential and commercial investment.

Both the scenic Biscayne Boulevard corridor and the 163rd Street commercial district are in the early stages of an exciting transformation that will bring many positive benefits and developments to the city. 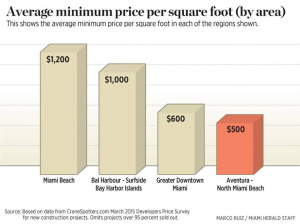 Led by Mayor George Vallejo, the city of North Miami Beach adopted a strategic plan in September that sets guidelines for real-estate development, design and zoning for the next 15 years. The “visioning” framework, which was guided by two consulting firms, encourages new mixed-use projects and high-end residential towers in appropriate locations. It also includes funds for a comprehensive parks master plan, which will make the city an even more appealing place to live.

Already, a new wave of commercial development is under way, including plans for new high-end restaurants and a hotel along West Dixie Highway south of the roadway congestion in Aventura. Gil Dezer, president of Dezer Developers in Sunny Isles Beach, purchased the Intracoastal Mall for $63.5 million last year and plans to open a luxury iPic theater in the mall this summer.

On the residential side, North Miami Beach is becoming a destination of choice for both domestic and international buyers seeking an alternative to higher-priced properties in more congested areas along the beach, in Aventura or in downtown Miami. Because the redevelopment of North Miami Beach is just in the early stages, pricing for luxury residences is more attractive than other markets that have already experienced a run-up in values. 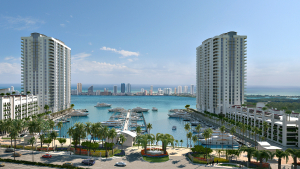 For example, the sales prices for the second tower of Marina Palms Yacht Club & Residences, now under development on Biscayne Boulevard, averages $550 per square foot. To the north, a residence in a new Aventura building would be $850 per square foot, and the price for oceanfront units could be double or triple that rate.

Looking back at the last few decades, it’s clear that South Florida communities are at varying stages of the real-estate cycle. For instance, South Beach real estate was a bargain in the 1980s, before a wave of new hospitality, retail and residential investment created one of the world’s most popular (and expensive) urban resort markets.

Downtown languished until the early 2000s, when new residential and mixed-use developments exploded on the scene. After the recession, developers were quick to pick up unfinished projects and market them on an all-cash basis to affluent buyers from Latin America and Europe.

Meanwhile, North Miami Beach has remained a quiet, suburban city with about 40,000 residents and great recreational amenities, such as Greynolds Park and Oleta River State Park. In addition, the Biscayne Bay campus of Florida International University is conveniently located in nearby North Miami.

With its new strategic plan in place and a growing flow of commercial and residential real-estate investment, North Miami Beach is entering a new era, just as other Miami-Dade communities have evolved in the past.

Now the world is about to discover the new “hidden gem” in South Florida’s real-estate market. It’s an exciting time to participate in the transformation process, which will create a bright future for North Miami Beach and its residents.