Sitting between Apple’s Infinite Loop headquarters and the spaceship-like Apple Campus 2 in Cupertino, California is the failed Vallco Shopping Mall. 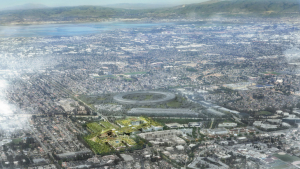 Now Architect Rafael Viñoly has unveiled a proposed $3 billion plan for Sand Hill Property Company that starts with renaming the property The Hills at Vallco. The ambitious project will transform the old shopping mall into a sustainable and walkable LEED Platinum mixed-use community and include the largest green roof in the world.

The new neighborhood will feature a highly walkable and bikeable downtown anchored by two town squares. Parking will be hidden away underground and a transit center may be built at the shopping center. The complex will cover 15 blocks filled with 625,000 square feet of retail, 2 million square feet of office space, and 800 residential units — including 680 market-rate apartments, 80 affordable apartments, and 40 apartments for seniors. 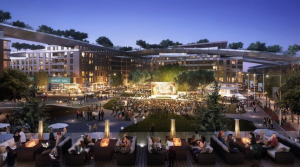 The Hills at Vallco will turn the current shopping mall into a
downtown-style street grid anchored by two town squares surrounded by a mix
of retail, office, residential and entertainment. Sand Hill plans to
integrate a 30-acre community park and nature preserve into the site.
Rendering courtesy Sand Hill Property Co.

Adding to the family friendly atmosphere, the development will include plenty of restaurant and entertainment options, such as an AMC movie theater, ice rink, bowling alley, and fitness club. The town squares may be used to host farmers markets and outdoor movie nights. 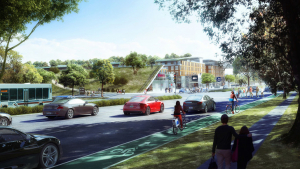 The Hills at Vallco’s crown jewel will no doubt be its $3 million, 30 acre green roof designed by Olin Landscape Architects. It will be an unprecedented engineering feat that is “at least twice as big as anything attempted before it.” The elevated community park will include 3.8 miles of walking and jogging trails along rolling hills, orchards, vineyards, meadows, organic gardens, children’s play areas, and a sanctuary for native fauna and flora. 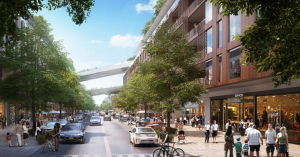 “There will be nothing like it when we are done,” Reed Moulds, Sand Hill’s managing director tells the Mercury News. “We believe its community focus will make this a remarkable place to live, work, dine, play, learn, and recreate.”

Approval by the City of Cupertino is pending, according to Tree Hugger.