The Argentine investor who made international headlines in 2014 when he paid $125 million for 1.25 acres along the Miami River has filed plans to build a 69-story condo tower there. 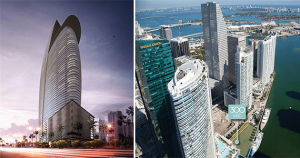 Riverwalk East Developments, led by German Coto and Gloria Coto from a family that owns a supermarket chain in Argentina, wants to build the project at 300 Biscayne Boulevard Way. Tentatively named Epic 2, it would have 384 condos in 1.09 million square feet and 561 parking spaces. When combining the condos with the parking and other amenities, the tower would total 1.64 million square feet.

The sail-shaped tower would be topped with a lighthouse feature. It would have an open-air pool deck on the 55th floor, plus a gym and sky lobby.

The Miami River Commission’s Urban Infill Committee recently approved the Epic 2 project with conditions, namely that its new public riverwalk be widened to 15 feet from 12 feet. The riverwalk would allow people to walk from Bayfront Park to Brickell along the mouth of the Miami River.

“This is probably the most desirable location for the public to enjoy the river and the bay at the same time,” MRC Chairman Horacio Stuart Aguirre said. “That river walk will be one of the most desired locations for early morning and later afternoon strolls to take in the fresh air and enjoy the view.”

The condo at 300 Biscayne Boulevard Way in Miami would have 384 units,

Aguirre said the building’s design is architecturally appealing, although it would need extra-strong structural support to handle hurricane winds because it appears narrow. He expects the project to receive the recommendation of the full MRC board in about three weeks. The project would also require city approval for its design. The density falls within the property’s current zoning.

The bigger question is whether the Miami condo market can handle another project where unit prices are expected to average more than $1.5 million. Sales to the foreign buyers that fuel the market have slowed down in recent months, and several experienced developers have decided not to launch sales for new projects until the market picks up. On the Miami River, Kar Properties’ One River Point and a project by the Chetrit Group are already competing for high-end buyers. However, the Epic 2 site is further east along Biscayne Bay, while those two are upriver.